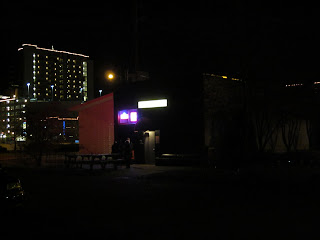 This show first caught my attention thanks to the presence of Creatures of Wizardland on the bill.  Brandy Rendon, one half of this local duo, has been my friend for a few years now.  Seeing a friend's band can be a little risky (contrary to what some people believe, I don't like or write nice things about everybody I see), but in the end, my curiosity ovecame my sense of caution.  It helped that I'd never heard of the headliner, Red Like This, before.  It helped too that they hailed from Baltimore (I wondered if my watching The Wire obsessively would attune my ears to the Baltimore accent). 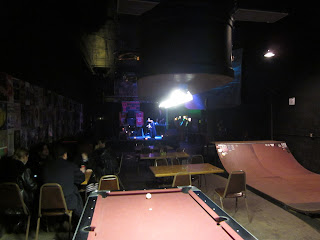 I counted a little over twenty people when I arrived at the Shredder.  A few more folks would trickle in as the night progressed.  I imagine that a big chunk of this show's potential audience was either at Neurolux watching Red Fang or at the Revolution Concert House watching Alice Cooper.  Still, this struck me as a pretty choice audience: I noted a high number of musicians, including Kyle Mann from the Acrotomoans, Joel Wallace a.k.a. Bonefish Sam, Holly Johnson from the Very Most and Luna Michelle from Storie Grubb and the Holy Wars.  I bought a Rainier, sat down with some friends and listened to the industrial tunes booming out of the PA system courtesy of DJ Bones. 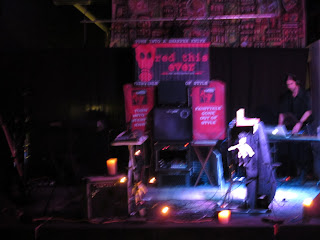 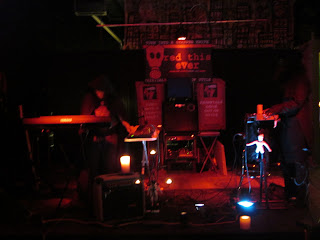 Creatures of Wizardland kicked off the night's live music.  Using some synthesizers, a bass, a tripped-out mic and a metal candelabra, Brandy Rendon and Tracy Maret conjured up a dense, spooky forest of sound.  Their menacing drones, bone-simple riffs and beats, heavily distorted growls and ominous tinkles and clangs and hoots and whooshes made me think of Brian Eno on the brown acid.  Their black cloaks, black (Rendon) and white (Maret) masks and flickering strobelight added to the overall eerieness.  This stuff was definitely not for all tastes, but I liked it fine.  It helped that they brought a playful, even goofy touch to their whole dark fantasy aesthetic.  It kinda felt like watching horror movies at a sleepover. 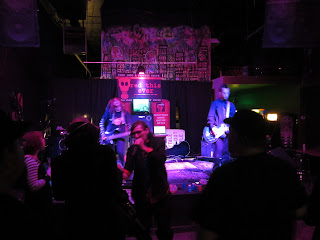 Red This Ever played next.  While Creatures of Wizardland kept their playfulness more on the down-low, this group waved it high for all to see.  Their pounding beats, propulsive basslines, 80's synthesizer tracks, energetically deadpan vocals and lyrics about Halloween, one-hit-wonders and animals fighting the weather made me think of what the Sisters of Mercy might sound like if Fred Schneider took over for Andrew Eldritch.  Their mega-catchy campiness didn't lack for edge, however, thanks in no small part to Gabriel Perry's scorching metal guitar.  Frontman Roy Retrofit spent most of the set off the stage; he marched around the Shredder with his cordless mic, slid down the skate ramp and mingled with the crowd.  Bassist Ada Ruiz's between-song banter with Retrofit amped up the open, playful vibe even further.  When the time came around for some audience participation, the modest crowd dove right in (me included): they put on crocodile hats, tapped out the beat on plastic cups with wooden ladles (a couple folks did some swordfighting with the ladles too), blew bubbles, danced, stomped, cheered and sang good and loud.

A couple of people told me that this was the greatest show they'd ever seen.  I wouldn't go that far, but I'd definitely call it one of this year's best.  (And yes, I could hear a little of that Baltimore accent.) 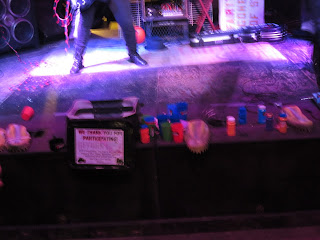 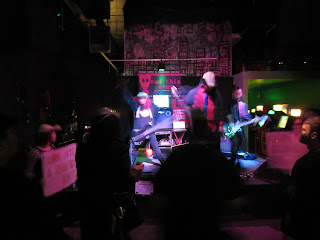 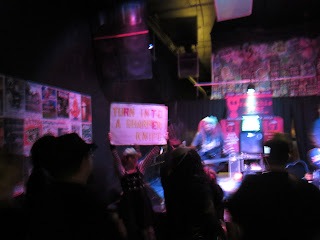 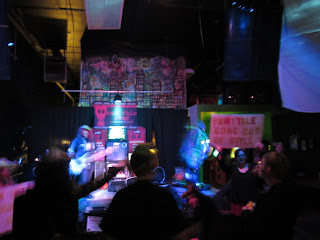 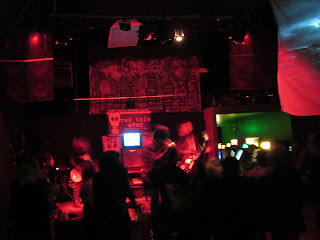 You can find info on these groups on Facebook and elsewhere online.
Posted by B. Schultz at 5:55 PM