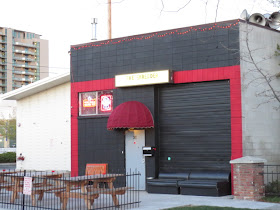 Why do I do this to myself?

I'd marked this show down on the calendar, but as the day approached, I felt like taking a small break from this blog.  I'd halfway convinced myself to go hang out at the Crux's open mic instead.  Then I checked the names under "Sounds Like" on each out-of-town act's Reverb Nation page.  Band of Horses, Nick Cave and the Bad Seeds, Siouxie and the Banshees, Tori Amos, hmm...  Then I listened to a couple of each act's songs.  "Great," I said afterwards.  "Now I have to go to this show." 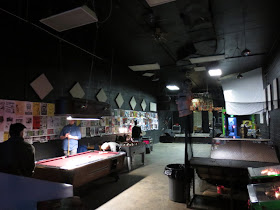 Apparently, no one else wrestled with the decision to check out this concert (or they just didn't hear about it).  I counted three non-musicians when I got to the Shredder.  In all, I don't think that more than ten or eleven people showed up over the course of the night. 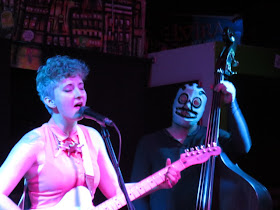 Minor Birds, a duo from Twain Harte, CA, opened the show.  In a way, I suppose that the meager crowd suited this group's music.  Not that it was especially esoteric: Joel Wilde's groaning stand-up bass and Chelsea Wilde's guitar and keyboard riffs were hypnotic in their simplicity.  It's more that, between the indigo melodies, the disquieting lyrics and Chelsea Wilde's swooning, somber wail, this set felt charged with a certain fraught intimacy.  This was music for dark nights of the soul.  Not that the musicians themselves were particularly gloomy: Joel Wilde's luchador mask felt more humorous than menacing, and Chelsea Wilde punctuated the set with loads of playful, self-deprecating, slightly loopy banter.  She told the tale of having her guitar stolen in Denton, TX and needing to pay the pawn shop to get it back in a tone that was much more WTF? than woe-is-me. 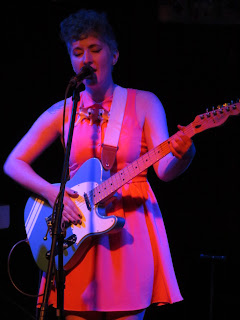 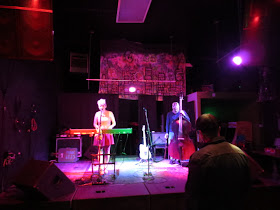 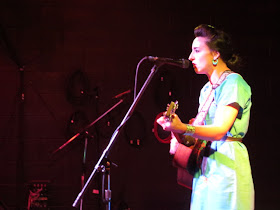 Portland musician Kat Jones played next.  "Um, yeah," she said early on.  "So I'm here to guide you through the apocalypse."  That's pretty much what her music felt like.  There wasn't a hint of cheese or cornpone in Jones's eerie folk/country tunes and aching, sinister, powerful vocals.  Her strong sense of rhythm further accentuated the cast-a-cold-eye feel of this set.  Even the songs that weren't part of the murder ballad section made the hair on the back of my neck stand up.  Genuinely haunting.  Not humorless, though: Jones loaded the set with plenty of dry banter.  She introduced one murder ballad, "Luckily the Gun Did Not Go Off," took a beat, then added, "It kind of did." 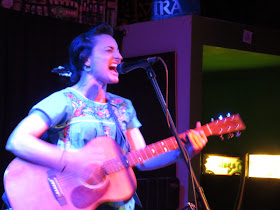 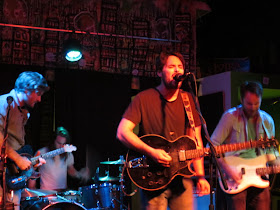 After Kat Jones came Brown Shoe.  Commitment and perseverance count for a lot.  If you play a show with just a handful of people watching and you still give it your all, you'll get my respect at the very least.  So I'd be inclined to look kindly upon this group from the perspiration that soaked frontman Aaron Baggaley's hair and shirt alone. 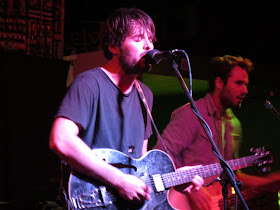 Sweat wasn't all that they had going for them, however.  Bright, misty guitars, winsomely anthemic tunes and Baggaley's smooth, yearning tenor combined with pained lyrics, fluid basslines and surging drums to create a sound that was at once airy and roiling, turbulent and dreamy.  According to the bio on Brown Shoe's Facebook page, they've been compared to Sigur Ros, My Morning Jacket and R.E.M.  I could hear all of that in there.  I'll add, though, that, except for R.E.M., I like these guys a lot more. 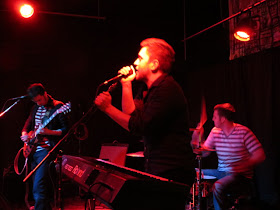 Local group the Social Electric (formerly known as St. Helens) closed out the night.  I thought that these guys were outstanding when I saw them open for New York City Queens back in February.  Good to see that I wasn't wrong.  Mark Jensen's light voice and delicate, ringing keyboard, Joe Atchley's fleet-fingered, face-melting guitar work and Ben Clingan's intricate, propulsive drumming provided a fine finale to this show.  They had indelible melodies and well-honed arrangements to spare, but they still rocked hard.  If they can find a bassist (or figure out a way to fill in the bottom end of their sound, at least), they'll be unstoppable. 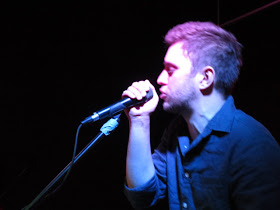 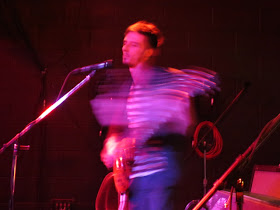 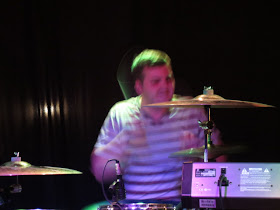 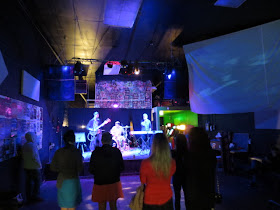 You can find info on these acts on Facebook and elsewhere online.
B. Schultz at 4:58 PM
Share