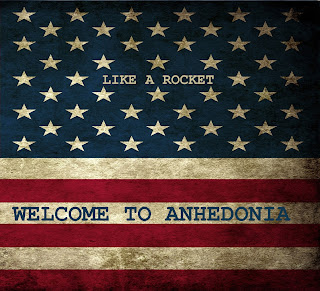 I like Like A Rocket's first album Hey Man quite a bit; it's got well-crafted songs, smart vocals and some clever production (I especially like how "NY Girl" sounds like the Strokes).  After I'd listened to it for a couple of months, however, a voice in the back of my head started talking.  "Yeah, the songs are good," the voice said, "but the whole thing feels a little safe, a little tame.  Also, the drums don't sound quite right; they don't have the meaty thwack that they should.

"I get that these guys were just figuring stuff out on that one, and I know that they kill it live.  Still, when are they gonna record that devil's child song?  Or that waiting-on-the-fall song?  When are they gonna put something out that'll justify my calling them one of the best bands in Idaho?"

Well, they just did.

The warning shot came in March with the release of the solo acoustic single "Reason for the Gun."  A stark, chilling sermon that wouldn't sound out of place on one of Johnny Cash's American albums, the song signaled a broadening of scope and ambition.  The band got a small reward for stepping up their game when "Reason" was featured on No Depression's website.

If there's any justice, the release of Welcome to Anhedonia should garner Like A Rocket even more attention.  The album is a full-bodied dose of lust, fear, guilt and rage.  It improves upon Hey Man in almost every way--songwriting, musicianship, production.

Anhedonia's twelve tracks are loosely connected by a noir-ish story about a couple who embark on a robbery/murder spree.  But unlike, say, Quadrophenia or Southern Rock Opera, the album doesn't really unfold in a linear fashion.  Instead, it plays more like a fugue or a reverie.  It's as if the songs are running through the guy's head as he's sleeping on death row.

The title's a bit ironic, considering Anhedonia's numerous pleasures.  The album has enough fiery guitar to make any red-blooded Skynyrd fan tumescent.  The outro to "Legend of a Fool," for example, features not just one but three solos all stacked on top of each other (the first by Built to Spill's Brett Netson, the second by Z.V. House, the third by Speedy Gray).  That tapestry of guitar is just one of many inspired production touches.  Others include the smoky saxophone playing beneath the bluesy guitar solo on "China White" and the shimmering strings and sarcastically rising harmonies on "Ready for the Fall."

Throughout, the groove laid down by Z.V. House's rock-steady bass and Max Klymenko's tough, meaty drums will sound familiar to anyone who's heard the band firing on all cylinders on a Saturday night.  Speedy Gray's weathered drawl handles drugged-out languor ("China White"), psychotic fury ("Graveyard") and gnawing dread (just about everything else) with equal ease.  The tunes stick to your ears, and the lyrics are as clear and sharp as a broken bottle of Jack Daniel's on the pavement.

As satisfying as Anhedonia is, one can reach the woozy mandolin and autoharp at the end and feel that there should be more.  This is undoubtedly intentional; Speedy Gray has stated that the band hopes to release a follow-up EP entitled Police Report later this year.  Time will tell how that turns out.  One thing's for sure: the bar has been set very high indeed.

You can find info on Like A Rocket on Facebook and elsewhere online.  Welcome to Anhedonia is available now on Bandcamp and will be released on CD on July 20.
Posted by B. Schultz at 11:10 AM