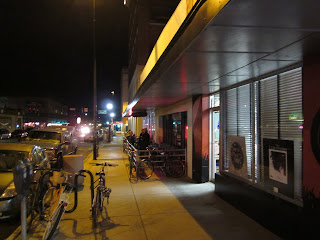 This show was something of an indulgence for me.  When I'm planning out my calendar, I usually give special attention to shows featuring groups I've never seen before.  A Seasonal Disguise seems to improve each time I see them, however, and I never get tired of seeing a.k.a. Belle.  So, it being so close to Thanksgiving, I decided to treat myself a little. 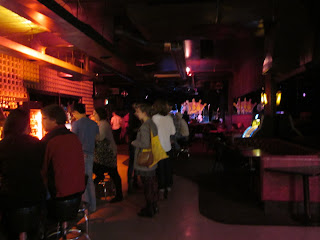 I saw about thirty people when I got down to Neurolux.  A few more would trickle in as the night progressed.  Not a huge crowd, but not bad. 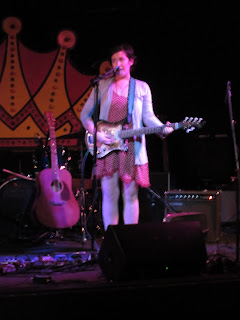 First up was Danielle Galucki a.k.a. Kailie Leggett from the dearly departed local band Range Life.  She sang her plain ditties in her high, sweet voice and strummed her guitar in simple downstrokes.  She forgot lyrics, stopped mid-song when she just wasn't feeling it and looked pretty nervous throughout.  I imagine that some people would've found all of this unbearable.  Me, I found it funny, brave and utterly charming.  Half of the trick lay in Leggett's smart, detailed, acerbic lyrics, which undercut the sweetness of her singing and her melodies' childlike simplicity.  The other half lay in the fact that, while she did look nervous, she didn't sound affected, smarmy or smug (which is often how stuff like this comes off).  Her forthrightness gave the rough edges of her performance a refreshing, almost punk-like quality.  Call it perverse if you want, but I haven't enjoyed too many recent sets quite as much as I did this one. 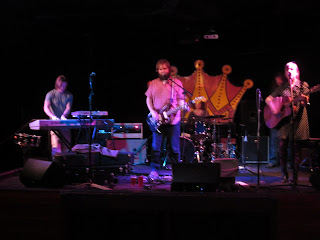 A Seasonal Disguise played next and sounded in fine form.  Their deepening rapport and sturdy groove gave Z.V. House's guitar a more solid foundation from which to take off.  And take off it did: House's elegant soloing called to mind not just Neil Young but Richard Lloyd and Tom Verlaine.  They started, stopped, slowed down and sped up without stumbling, and their increased confidence added an extra sheen to the melodies.  They got some warm applause from the crowd, and rightly so. 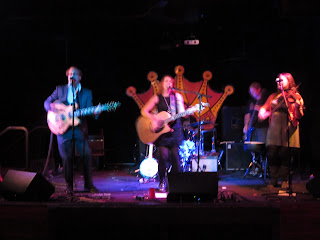 a.k.a. Belle set a record with this performnace (as far as I can recall): they didn't even play one song before they started bantering with each other.  It all began with Catherine Merrick warning Sam Merrick not to cuss, since they were being broadcast live on Radio Boise.  Sam Merrick proceeded to tell the audience a little story that led up to the show, bleeping out the curse words with a few guitar chords.  It went on pretty much like that for the rest of the set.  I hope that the folks out in radioland found this as amusing as I did.  Too bad that they couldn't see Catherine Merrick's classic I'm-gonna-kill-this-f*cking-idiot glare (I see it a lot when I'm hanging out with married/dating friends).

Oh, and I should probably mention that the music sounded great too.  This set featured the return of Mike Rundle, whose smooth and steady work behind the drumkit kept the songs swinging.  Bass player Jason Griesa greased the groove nicely in spite of his reportedly having to play on painkillers (Sam Merrick mentioned that the man had to undergo back surgery soon).  Catherine Merrick had apparently been sounding hoarse over the past couple of weeks, but you sure couldn't hear it as her voice rang out across the bar.  Meanwhile, Kayleigh Jack's serene fiddle and harmonies complemented Sam Merrick's jagged, searing guitar.  While their older songs sounded as gorgeous and rowdy as ever, their newer material makes me look forward to their second album, which they're apparently working on now. 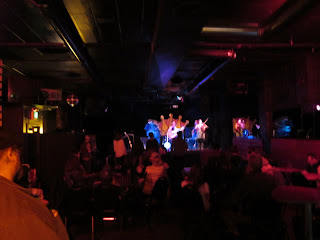 You can find info on these acts on Facebook and elsewhere online.  Special thanks to Eric Gilbert and Radio Boise.
Posted by B. Schultz at 2:52 PM