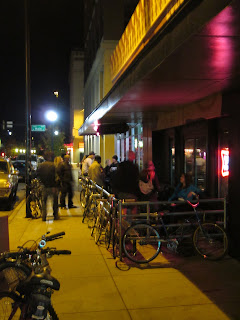 The Reverend Peyton's Big Damn Band had rolled through Boise at least once before (I wanna say two or three times, actually), but I'd never gotten to see them.  The name stuck in my head because... well, it's a pretty cool name.  So, when I saw that they'd be playing this show, I marked it down on the calendar. 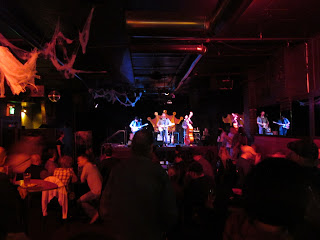 I estimated at least sixty or seventy people at Neurolux when I arrived.  The crowd looked a bit older than usual: I'd put the average age at mid-forties or early fifties.  Good to see that it ain't just the youngsters who are getting hip to Radio Boise. 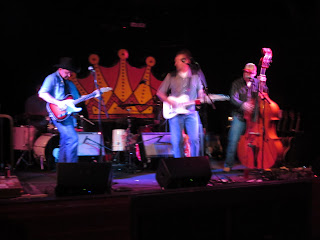 First up this night was local band Poke.  Their tongue-in-cheek take on rockabilly boom-chicka-boom was pleasant enough if a bit faceless.  B-Rad's stolid baritone, Diesel's straight-ahead standup bass and Smokin' J's sturdy drumming went over well enough with the crowd even if no one took up B-Rad's invitation to dance (some folks off to the side of the stage did do some bouncing on the balls of their feet).  Much more than good enough: Johnny Shoes's undulant, on-point lead guitar. 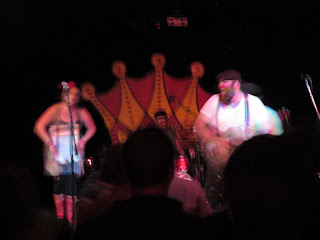 The Reverend Peyton's Big Damn Band (man, it's even fun to type that) took the stage next.  Where Poke seemed to nibble at the edges of their roots-music influences, this Bean Blossom, IN band sank their teeth in and chewed.  Hyperkinetic country-blues guitar, sinuous washboard and locomoting drums collided with rowdy vocals and sly, goofy lyrics.  Their manic hoedowns, warm banter and cartoonish stage act got the crowd whooping and hollering.  Shtick wasn't all they had going for them, though: the Reverend Peyton called time out at one point to educate the audience about his unique, resolutely old-school finger-picking style.  They knew and loved the blues well enough to pay it the tribute of irreverence.  Wicked fun. 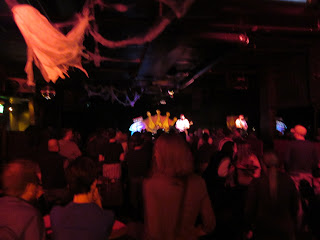 You can find info on these groups on Facebook and elsewhere online.  Special thanks to Eric Gilbert and Radio Boise.
Posted by B. Schultz at 5:09 PM