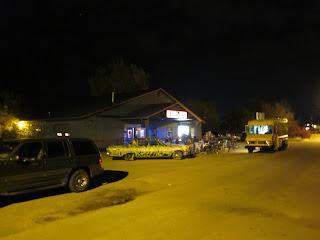 This show caught my attention thanks to the presence of Lost Lander on the bill.  Their Treefort performance helped earn them the number two slot on my Treefort Top 10 list, and I may have enjoyed them even more at the Neurolux back in July.  It didn't hurt either that the other two acts were new to me.  Although the Typhoon song that I played earlier in the day left me a little underwhelmed, that wasn't enough to dissuade me from checking this show out. 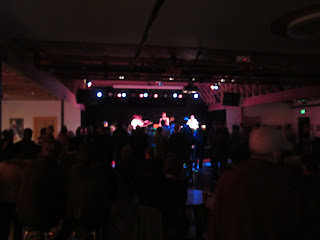 There must have been at least 120 or 130 people at the VaC when I arrived.  Typhoon must've done well for themselves at Treefort also, I supposed.    I plopped down my coat by the wall, popped in my earplugs and took out my notepad. 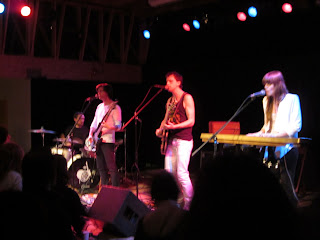 Lost Lander kicked off the night.  They sounded just a touch more casual this time around, but that only gave this set an easy-going charm all its own.  Of course, it helped that songs like "Afraid of Summer" and "Cold Feet" sounded as lovely as ever.  Matt Sheehy, Sara Fennell and Dave Lowensohn's vocals glided above their chiming guitar, wistful keyboard and driving basslines while Patrick Hughes's drums rolled and tumbled down below.  A nice little touch: Sheehy sported an Atomic Mama tank-top during the set. 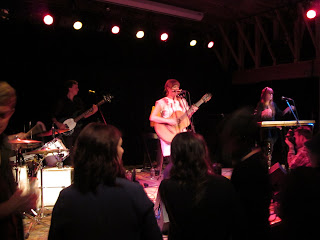 Laura Gibson played next.  From her straight-outta-Dorothea-Lange house dress to her cutesy murmur and lullaby melodies, this Portland-based musician felt a little too quaint and precious for my personal everyday use.  Said murmur and melodies weren't without their charms, however, especially when combined with Gibson's reserved yet warm stage presence (which helped put a solo sing-along moment over) and Lost Lander's strong, sympathetic support.  A spoonful of medicine helps the sugar go down sometimes. 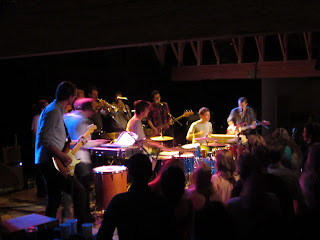 Typhoon closed out the night.  If this eleven-piece Portland band had trimmed down some--cut one of the drummers, say, as well as one of the violinists and a couple of the horn players--they'd have been a decent enough indie-rock outfit (no Lost Lander, though).  As they stood, their music called to mind the David Lean film Ryan's Daughter: it was pretty and well-crafted but ultimately sank from the sheer overkill of the whole enterprise.  And actually, I didn't find it all that pretty: the halting self-regard of Kyle Morton's vocals rubbed the part of me that dreams of crushing Justin Vernon's larynx the wrong way.  Other cute little touches like the sports-team huddle that kicked off their set and a violin-and-sleigh-bells passage at the end threatened to test my gag reflex as well.

And now that I've got that out of my system, I should note for the record that mine was/is most decidedly the minority opinion.  Nearly everyone else in the crowd swayed, danced, stood on their seats and cheered wildly.  I should also note that one of the most heartwarming moments out of any live show this year occurred during Typhoon's set.  About three quarters of the way through, the band stopped so that an avid fan could climb onstage and propose to his girlfriend.  She said yes.  The crowd roared. 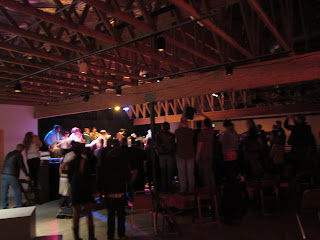 You can find info on these acts on Facebook and elsewhere online.  Special thanks to Eric Gilbert and Duck Club Presents.  And all the best to Joey and his fiancee.
Posted by B. Schultz at 5:02 PM