This has been a good year for seeing old far--er, legends.  Dave Alvin, Mike Watt, Toots and the Maytals, Henry Rollins, the Vibrators, State of Confusion, Peter Murphy, James McMurtry, Jonathan Richman--that's a long list.  This show caught my attention because it featured a name that I thought would make a proud addition to that list.  That was Blowfly a.k.a. Clarence Reid, a man who wrote songs for artists like Wilson Pickett, Betty Wright and KC & the Sunshine Band and whose X-rated raps and song parodies helped inspire a number of old-school hip-hop artists (Chuck D, Ice-T, etc.). 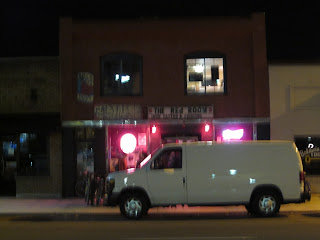 I counted a little over thirty people when I got down to the Red Room.  That number would grow to maybe fifty by the time that Blowfly played.  Not bad at all for a Sunday night, but still pretty meager, considering the headliner's rep and history.  Eh.  What're ya gonna do?

Unfortunately, a technical error erased my photos of the show, so I can't include any images of Blowfly's wrinkles, paunch or puke-green costume.  Sorry.  My next post'll have some real purdy pictures.  I promise.

First up this night was local group Velvet Hook and the Dagger Ladies.  This quartet, which featured Kelsey Swope a.k.a. Grandma Kelsey on harmony vocals, did pretty well for their live debut.  Gentle tunes combined with jangly, metallic riffs and swinging, rumbling drums.  K.C. Martin's and Kelsey Swope's subdued vocals complemented each other very nicely (they weren't all subdued, actually--Swope broke out a cute little scream here and there).  They sounded a bit ragged in spots, but they definitely showed promise.

Blowfly took the stage soon after Velvet Hook.  Backed up by a three-piece band, he ripped through a series of raunchy, hilariously un-P.C. original songs like "To Fuck the Boss," "I Fuck Everything," "The Incredible Fulk," "Pussy Hell" and "Rap Dirty," "the world's first rap song" (Blowfly's description).  His set also included plenty of space for parodies of songs like "Beat It" ("Eat It"--most definitely not the Weird Al song), "Should I Stay or Should I Go?" ("Should I Fuck that Big Fat Ho?") and "Soul Man" ("Hole Man").  Blowfly's gritty, raspy delivery had a crude I-don't-give-a-fuck charm to it, and his backing musicians laid down some solid, greasy funk (his guitar player in particular showed some impressive chops).  Also, for all of his cheerfully lewd and scatological jokes, a certain courtliness ran through Reid's interactions with the crowd.  Call him a dirty old gentleman.

It had gotten pretty late by the time that Blowfly finished, so I'd had to leave before Shades played their closing set.  Jeez, I just can't a break with this group.  Oh well.  I've got one of their upcoming shows marked down on my calendar.  Come hell or high water, I WILL write about those guys.

You can find info on these groups on Facebook and elsewhere online.  Special thanks to Wes Malvini and the Red Room.
Posted by B. Schultz at 8:43 PM