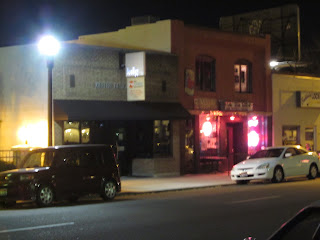 Even though two of them were local, I'd never even heard the names of any of these acts before this show.  That alone, of course, would've got me interested in checking it out.  I grew more intrigued when I read some quotes included in the Facebook invite about the headliner, MV & EE.  Should be different at the very least, I thought. 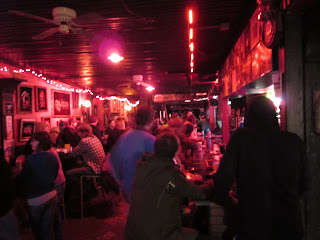 I counted a little over forty people when I got down to the Red Room.  The crowd was comprised mostly of the younger hipster contingent and included quite a few familiar faces, the most surpising of which was that of Colorado musician Rence Liam a.k.a. Dear Rabbit.  "Wow, he must really like this town," I thought.  I became a little less impressed when I saw his merch set up by the pool table, but still, three shows in a year... 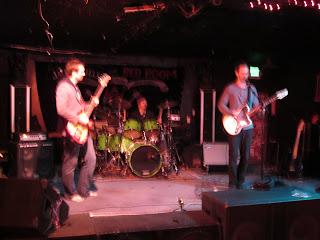 Local trio Lucid Aisle opened the show.  I grew puzzled by the audience keeping a couple of yards away from the stage during this set.  Maybe they were just afraid of having their faces melted off.  This group would start out nice and easy with a little jangly guitar, a little dripping bass and some steady drumming.  Then they'd flip the switch and the whole package would explode.  Their locked-in rapport and skill at handling shifts in dynamics made me think of Red Hands Black Feet, and their fierce solos called to mind Cerberus Rex.  Very impressive. 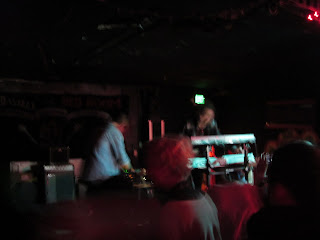 Next up was local electronica duo Blurred-Vision.  With their unwavering mid-tempo beats and pretty little hooks all in a row, this group sounded like outtakes from a Georgio Moroder or Cliff Martinez soundtrack.  Their singer's plain moan got swallowed up in the waves of synth, which was probably just as well.  The crowd didn't have any reservations about getting close for this set; they were up and dancing for the duration.  Pretty good background or dancefloor music. 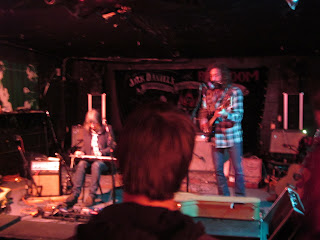 MV & EE (Matt Valentine and Erika Elder) played next.  This Vermont duo sounded like the missing link between Neil Young and Sonic Youth.  Moody, disarmingly serene folk-tunes and Dylanesque harmonica blended with seething distortion freak-outs.  Valentine and Elder's mellow vocals wafted along as if oblivious to their stinging, buzzing guitars and weeping, yowling slides.  Their lyrics weren't as mushy or obscure as you might think, however.  Indeed, their one-dimensional bluntness held considerable charm (I particularly liked one song entitled "Shit's Creek").  Different for sure.  Memorable too.

I left right after MV & EE because I had to be up at 5:30 the next morning.  Hopefully, some folks stuck around for Dear Rabbit. 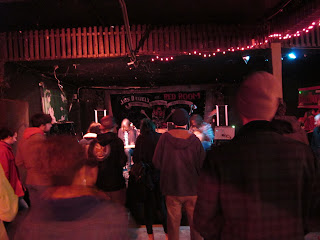 You can find info on these groups on Facebook and elsewhere online.  Special thanks to Eric Gilbert and Duck Club Presents.
Posted by B. Schultz at 9:47 PM