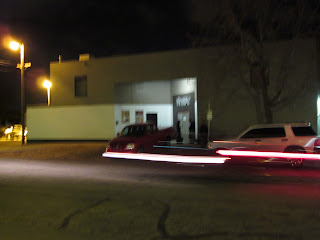 My friend and I were hanging out one night a few weeks back when we got handed flyers for this show.  When my friend saw Andrew Jackson Jihad's name on the bill, she flipped out and asked if I wanted to see this with her.  Given my great respect for her musical taste, I couldn't very well say no. 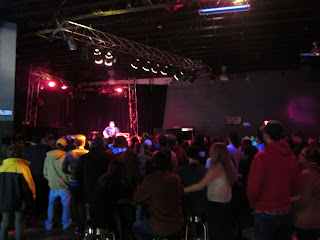 She wasn't the only one excited about this gig, apparently.  There had to have been well over a hundred people when I made it down to the Venue (well over 200, according to the Venue staff).  Unfortunately, I didn't see my friend among the crowd (probably needed to work), but I did see members of Red Hands Black Feet, Le Fleur, the Green Zoo and the Useless. 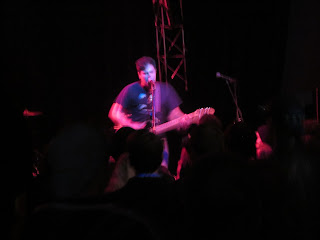 New York musician Jeff Rosenstock opened the show.  It woulda been nice if he'd played with a band instead of some backing tracks, but the recorded bass, drum and guitar parts were still pretty darn rousing.  Besides, Rosenstock's strong tunes, raw soloing, charmingly pitch-challenged howl and high-energy stage act did just fine on their own.  I couldn't make out too many of the lyrics, but his gloriously awful cover of Tom Waits's "Anywhere I Lay My Head" (which he sang down among the crowd) persuaded me to give him the benefit of the doubt. 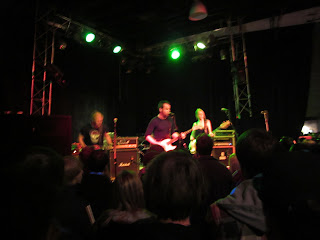 Next up was Future of the Left, a four-piece outfit from Cardiff, UK.  I had a feeling that this group was gonna be good when I saw that they'd modeled one of their t-shirt designs after Saul Bass's Vertigo poster.  Damn if they didn't prove me right: they mixed smart, funny, righteously indignant lyrics and on-pitch screaming with grinding riffs, monolithic basslines and pulverizing drums.  Not only did they go metal and disco, they sometimes did both at once.  And brother, it's hard to beat the Brits when it comes to telling off a drunken heckler ("Give you a reason?  Sir, you're talking entirely in cliches.").  They didn't need to do too much of that, though: other than that one guy, the crowd was happy to cheer, clap to the beat and climb onstage to do some screaming call-and-response with the band ("I TRUSTED YOU!") during the finale. 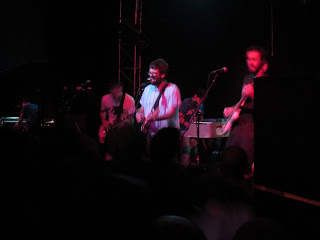 The show could've ended after Future of the Left and I'd have been satisfied, but Andrew Jackson Jihad took the stage next and turned in an equally impressive set.  This Phoenix band's nerdy vibe, multi-genre tunes and goofy, incisive, sarcastic, sardonic, surreal, grisly lyrics smashed together the Ramones and Randy Newman (and maybe tossed in some Meat Puppets for good measure).  They zipped through ragtime, blitzkrieg, Bakersfield, country swing and solo-acoustic.  Some of the more blood-soaked tunes made me uneasy (particularly one little ditty about finding a girlfriend's corpse), but their closing ode to existential terror ("I'm afraid of the things I wanna do but I won't...  I'm afraid that my dog doesn't love me anymore...  I'm afraid of my grandfather's cancer...") put that stuff in perspective.  Whatever the subject matter, the crowd cheered, sang along, headbanged, jostled each other, crowd-surfed and stage-dived. 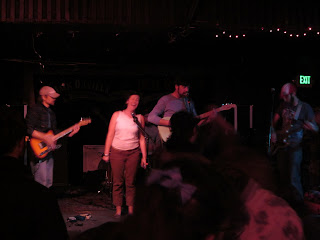 My night would've been more than complete after the Venue show, but then I got to the Red Room in time to catch most of local band Range Life's final performance.  Not only did their jangling drones, elegant solos and lean, limber rhythm section all sound in top form, Kailie Leggett had returned to sing one last time with Ben Turner, whose vocals never sounded more confident.  A crowd of about thirty sent Range Life off into that good night with dancing and warm applause.  A fine farewell. 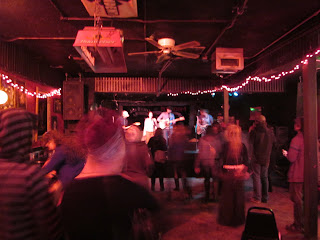 You can find info on these acts on Facebook and elsewhere online.
Posted by B. Schultz at 11:05 PM