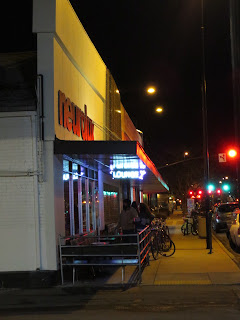 There was some cool stuff happening around town this night.  While the Linen Building hosted Edmond Dantes's EP release party, Hot Dog Sandwich Headquarters and Evil Wine threw a Who Framed Roger Rabbit?-themed show at the Red Room.  However, as tempting as these choices were (Kelly Green as Jessica Rabbit, mmm...), I couldn't pass up the chance to see one of America's greatest living songwriters again.

For those of you who don't know James McMurtry, here's a brief 411.  He's the son of Larry McMurtry, the author of, among other works, The Last Picture Show, Terms of Endearment, Lonesome Dove and (with Diana Ossana) the screenplay for Brokeback Mountain.  His (James's, that is) first album was co-produced by John Cougar Mellencamp.  He's earned props from everyone from Stephen King to Patterson Hood (Drive-By Truckers) to Robert Christgau to Salon to the Washington Post to... well, you get the idea.  His Neurolux show back in June was one of my non-Treefort favorites of last year.

So, yeah--I was excited to see this guy again.  And curious to see how many gropes I'd receive from middle-aged women this time around (I got two or three back in June). 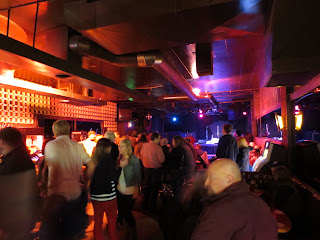 I counted well over a hundred people when I arrived at Neurolux.  By the time that James McMurtry played, the crowd looked to be just a hair smaller than the one that turned out for Built to Spill a couple of weeks ago (if rather less broad age-wise; I'd guess that the average was somewhere in the early/mid-forties).

As I stood by the DJ booth and waited for the show to start, I felt a hand spidering around my ass.  For a second, I thought that maybe someone was trying to steal my wallet.  When I turned around, however, I just saw a big-boned, middle-aged lady.  I blinked, breathed a sigh of relief, and checked that off my list. 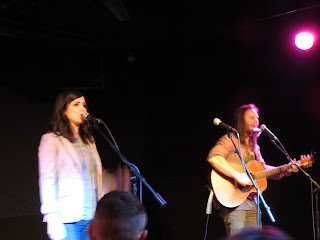 Lady and Gent opened the show.  You've seen this type of couple before (hell, maybe you are this type of couple).  He's a (lovable?) mess: drinks too much, questionable hygiene and grooming, prone to flights of cockeyed enthusiasm.  She's much more together: works out at the Y, has a steady job, wears just a little makeup, looks like a million bucks even in jeans and a t-shirt.  Even though they're not really a couple (she's married, he said, but not to him), this Salt Lake City duo seemed to fit that template like a glove.  Dana Sorensen's tender, thoughtful harmonies and demure stage presence complemented Garret Williams's false starts, manic expressions and hoarse, nervous vocals.  Williams's charming melodies and considerate, self-aware lyrics helped answer the question of why she stays with the S.O.B.

He wrote all the songs himself, Sorensen told the crowd near the end.  "They're OUR songs!" Williams countered with a smile.  "Cute, Garrett," Sorensen said. 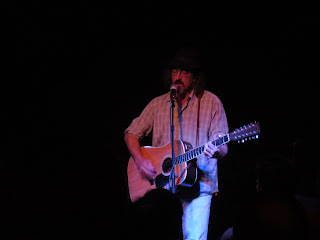 James McMurtry played next.  He didn't play with a band this time, but that gave him the chance to show how warm and nuanced his stolid baritone croon can be.  It also let him show how deftly he could play his ringing 12-string guitar.  And of course, it let his witty, detailed, incisive, sardonic, empathetic words shine even brighter.  I kinda missed the band on "We Can't Make It Here"--their relentless beat really accentuates the song's righteous anger--but I'm more convinced than ever that its lyrics should be carved in stone and placed at every former Occupy site.  Meanwhile, "Hurricane Party" and the "prototype" about the quirks that make an unnamed ladyfriend so special sounded as sly, clear-eyed, affectionate and gorgeous as they did last year.  The crowd roared and sang along throughout the entire set.  They raised their tallboys high at "I probably oughtta quit drinkin', but that don't mean I will" ("It took me twenty years to figure out I was a liquor salesman," McMurtry quipped afterwards).  They used what little space there was to boogie during the great white-trash epic "Choctaw Bingo." 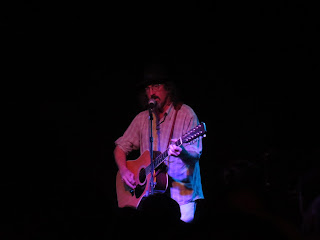 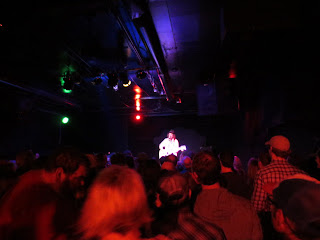 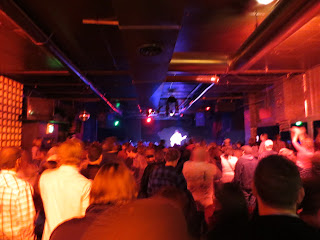 You can find info on these acts on Facebook and elsewhere online.
Posted by B. Schultz at 5:09 PM