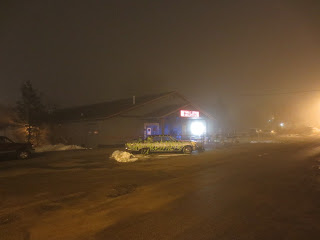 The copy on the Facebook invite for this show stated that Wovenhand's music "is an experience so visceral and so universally disorienting, [sic] that one has to take note."  If there's one thing that I've learned while writing this blog, it is never to trust a musician's ad copy.  Still, I'd never seen Wovenhand before, so I decided to check this show out. 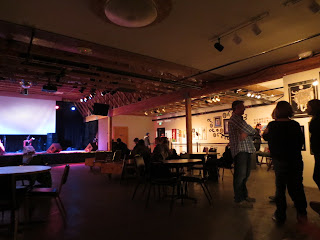 I grew alarmed when I got to the VaC at 8 pm (the start time on the invite) and saw only ten or eleven people hanging out.  Happily, the show didn't actually start until 9, which allowed the crowd to build to about forty-five.  That was still kinda small for a Saturday night show, though (not to mention one advertised in the Boise Weekly).  Maybe the wicked fog made people wary of making the drive over.  Couldn't blame 'em for that: I could barely see more than fifteen feet in front of me on my way down. 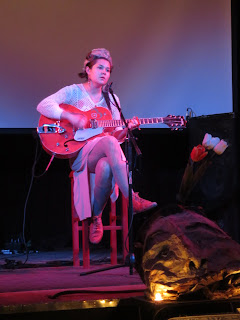 Grandma Kelsey opened the show.  She'd had a rough day, to put it mildly: she told the crowd that she'd not only gotten dumped but gone to a close friend's funeral earlier.  If these misfortunes affected her performance, however, they just made her lean harder into her steady strumming and warm, purring vocals.  They certainly put her more touchy-feely material in a new light--it takes a certain clarity and firmness of mind to sing about the circle of life after a day like this.  In addition to playing her more familiar stuff, Kelsey Swope unveiled a moving new song about Gregory Rawlins showing her the spot where he'd scattered his son's ashes.  All in all, a wonderful performance.  I just wonder if anyone found the stuffed animal that Swope had hid somewhere in the VaC (she said she does something like that every time she plays there). 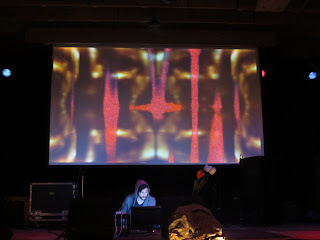 Up next was Eluder a.k.a. local musician Pat Benolkin.  Instead of delivering some smooth beats a la Lamont Kohner, Benolkin ventured out into straight-up avant-garde territory.  Waves of drones, hisses, scrapes, whirrs, crackles, clicks, rumbles and pings washed over the audience.  The mood would shift at various times from soothing to disquieting to menacing to overbearing, but a calm, meditative quality ran though the music and held it together.  Some misterioso montages (explosions, spinning planets, glowing grids and shapes, neon ovals, static, negative images of people) played in conjunction with the music.  These came courtesy of antimagic's Jason Willford.  Paired together, the music and the visuals seemed to invite the audience to sit and air out the darkest reaches of their minds.  Fascinating stuff. 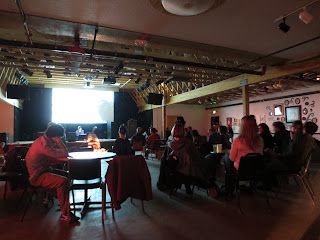 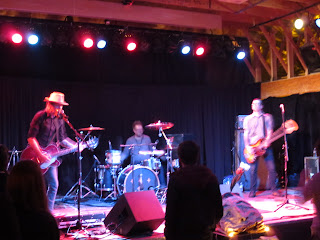 Wovenhand closed out the night.  This Colorado group's brooding, twangy roots-metal sound called to mind, of all bands, Fields of the Nephilim.  David Eugene Edwards's detached moan sounded much smarter than Carl McCoy's melodramatic growl, however.  Also, Wovenhand's hypnotic guitar drones, thudding basslines and unyielding drums packed a much bigger wallop than those carpetbagging Brits could muster.  As for Edwards's rather mirthless take on Christian values, I say let the man groan about Emmanuel as much as he wants.  As long as he keeps tithing to the Church of the Almighty Riff, it's all good by me.  The crowd seemed to agree, for lo, there was much whooping and dancing and banging of the heads.  And actually, Edwards himself wasn't entirely mirthless or humorless: he thanked the crowd at one point for coming out on a Monday night. 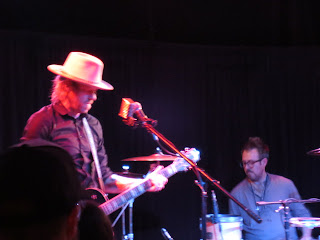 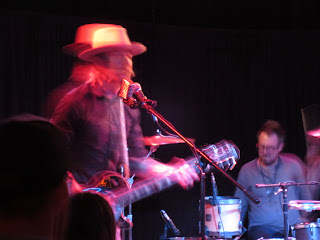 You can find info on these acts on Facebook and elsewhere online.  Special thanks to Eric Gilbert and Duck Club Presents.
Posted by B. Schultz at 10:48 AM