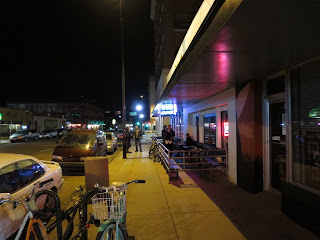 It's no secret how big a fan I am of Storie Grubb and the Holy Wars.  I always enjoy seeing them, but that in itself wouldn't have attracted me to this show (quite the opposite, in fact).  A couple members of the band had told me, however, that they'd had some tricks up their sleeves for this show.  I figured that that gave me reason enough to check it out.  Of course, it also helped that the bill featured Junior Rocket Scientist, whom I hadn't seen in a while, and Ghost Mic, whom I'd never written about before. 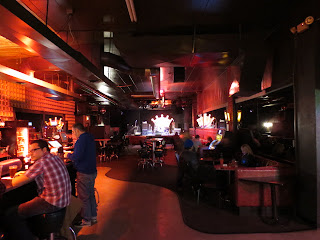 I counted only seventeen or so people when I arrived at Neurolux.  There would be over seventy, however, by the time that Junior Rocket Scientist came on.  A pretty solid Saturday night crowd. 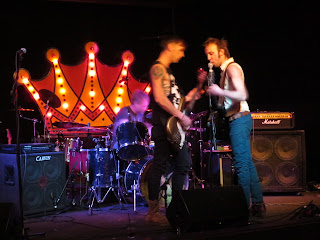 Ghost Mic opened the show.  This newly formed local trio had more than a few rough edges; they faced themselves more than the audience, had a couple of false starts and sounded rather stiff in general.  In spite of all this, their crude, clever, catchy songs showed tremendous promise.  They swapped instruments periodically during their brief set, but the music hit hardest when Rex Arnold's screeching guitar linked with Chris Jennings's elegantly simple basslines over Isaac Bonn's thrashing drumwork. 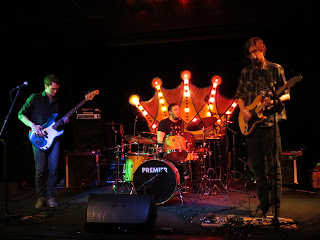 Junior Rocket Scientist played next.  It had been a while since I'd seen this group, but I honestly didn't remember them sounding quite so much like New Order or Joy Division (though I will note that I did compare Brian Anglin's bass work to Peter Hook's in both of my two previous write-ups).  Anyway, that's not a complaint--indeed, that kinda suggests how much I enjoyed hearing their tuneful basslines, clanging guitar drones, propulsive drums and wailed vocals again.  They may have sounded a little loose, but they plunged into the music with more than enough energy to compensate.  I just wonder how come they were only a trio this night. 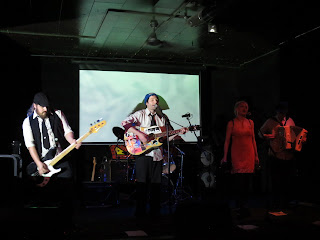 Storie Grubb and the Holy Wars closed out the night.  As promised, this set did indeed feature some surprises.  In addition to bringing back the flashing colors, abstract shapes and oddball black-and-white footage that this group employed back when they were a trio, they invited Fleet Street Klezmer Band's Shlomo Kostenko onstage to play some mellow, swooning stand-up bass on a couple of numbers.  The far bigger surprises, however, were the set's preponderance of stellar new songs (they were new to me, anyway) and pure hard-rocking power.  While Mathew Vorhies's accordion and Luna Michelle's backup vocals sounded as serene and charming as ever, Storie Grubb's guitar, Dustin Jones's bass and Bruce Maurey's drums surged forward with a righteous, punk-like ferocity.  This performance earned some appropriately boisterous applause from the audience.  Honestly, I try not to write that this is one of Boise's finest bands too much (don't want the description to get redundant), but dammit, there's just no way around it. 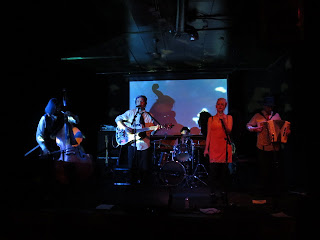 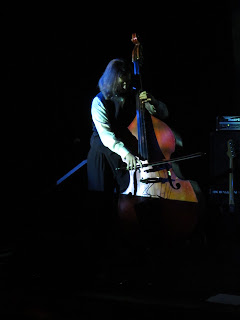 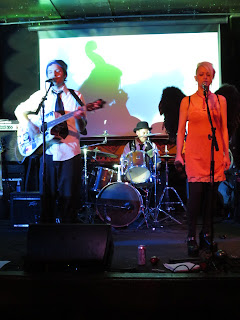 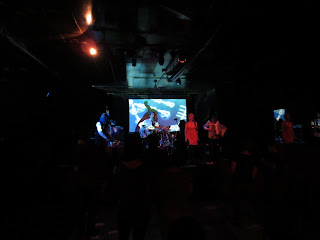 You can find info on Junior Rocket Scientist and Storie Grubb and the Holy Wars on Facebook and elsewhere online.
Posted by B. Schultz at 6:11 PM